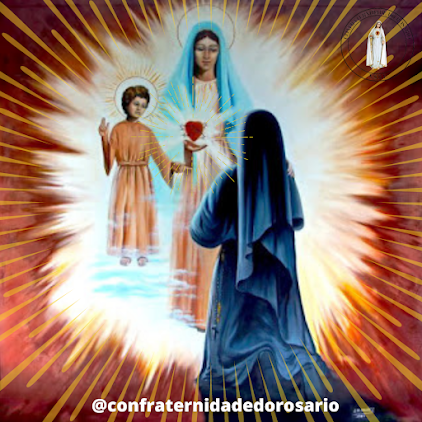 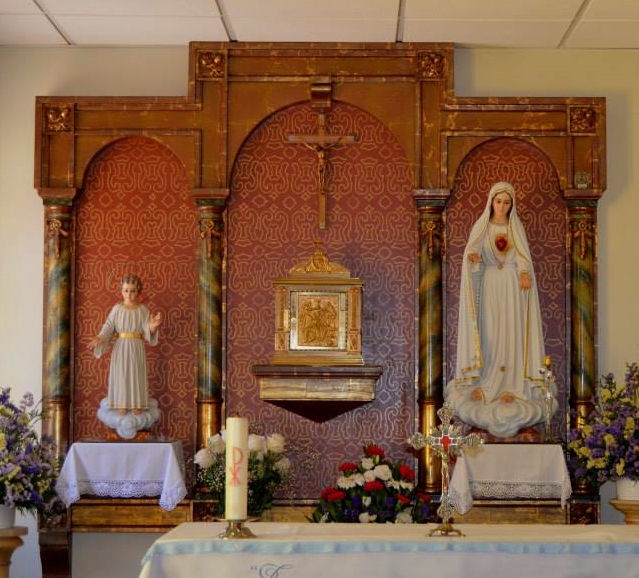 After fostering for some time the wish to become a religious, in 1925 eighteen-year-old Lucy joined the Dorothean Sisters. She became a postulant at the Order’s convent at Pontevedra, Spain where Our Lady, as She promised in 1917, came to reveal to Lucy the first part of God’s plan for the salvation of sinners in our time of revolt against God: the reparatory Communion of the First Saturdays of the month.

Lucy, referring to herself in the third person, describes the encounter:

On December 10, 1925, the Most Holy Virgin Herself appeared, and beside Her, borne by a luminous cloud, the Child Jesus. The Most Holy Virgin put Her hand on her shoulder and showed her, at the same time, a Heart surrounded by thorns which She held in the other hand. At that same moment, the Child said to her:

‘Have compassion on the Heart of your Most Holy Mother, covered with thorns with which ungrateful men pierce It at every moment, and there is no one to make an act of reparation to remove them.’

Then the Most Holy Virgin said:

‘Look, My daughter, at My Heart, surrounded with thorns with which ungrateful men pierce Me at every moment by their blasphemies and ingratitude. You at least try to console Me and announce in My name that I promise to assist at the moment of death, with all the graces necessary for salvation, all those who, on the first Saturday of five consecutive months shall receive the sacrament of Confession, receive Holy Communion, recite five decades of the Rosary, and keep Me company for fifteen minutes while meditating on the fifteen mysteries of the Rosary, with the intention of making reparation to My Immaculate Heart.’ 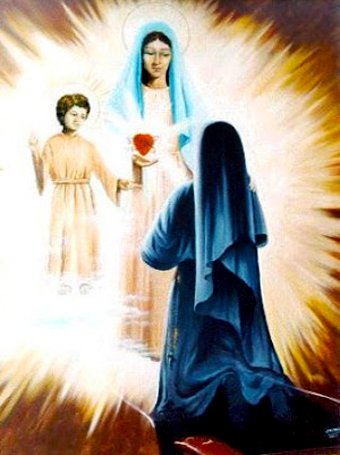 On the 15th [of February 1926], I was very busy with my chores, and I scarcely thought of it [the apparition of the preceding December 10]. I was about to empty the garbage can outside the garden. At the same place, several months previously, I had met a child whom I had asked if he knew the Hail Mary. He had replied yes, and I had asked him to say it for me, in order to hear him. But as he would not say it alone, I had recited it three times with him.

At the end of the three Hail Mary’s, I asked him to say it alone. As he remained silent and did not appear capable of saying it alone, I asked him if he knew the church of Saint Mary. He answered yes. I then told him to go there every day and to pray thus: ‘Oh my Heavenly Mother, give me Your Child Jesus!’ I taught him that prayer and departed. Then on February 15, while returning as usual [to empty a garbage can outside of the garden], I found there a child who appeared to me to be the same (as previously), and I then asked him: ‘Have you asked Our Heavenly Mother for the Child Jesus?’ The Child turned to me and said: ‘And have you revealed to the world what the Heavenly Mother has asked you?’ And saying that, He transformed Himself into a resplendent Child. Recognizing then that it was Jesus, I said to Him:

‘My Jesus! You know very well what my confessor said to me in the letter I read to you. He said that this vision had to be repeated, there had to be facts permitting us to believe it, and that the Mother Superior alone could not spread this devotion.’

‘It is true that the Mother Superior, alone, can do nothing, but with My grace, she can do anything. It is enough that your confessor gives you permission, and that your Superior announces this for it to be believed by the people, even if they do not know who it was revealed to.’

‘But my confessor said in his letter that this devotion already exists in the world, because many souls receive Thee every first Saturday of the month, in honor of Our Lady and the fifteen mysteries of the Rosary.’

‘It is true, My daughter, that many souls begin, but few persevere to the very end, and those who persevere do it to receive the graces promised. The souls who make the five first Saturdays with fervor and to make reparation to the Heart of your Heavenly Mother, please Me more than those who make fifteen, but are lukewarm and indifferent.’

‘My Jesus! Many souls find it difficult to confess on Saturday. Will You allow a confession within eight days to be valid?’

‘Yes. It can even be made later on, provided that the souls are in the state of grace when they receive Me on the first Saturday, and that they had the intention of making reparation to the Sacred Heart of Mary.’

‘My Jesus! And those who forget to form this intention?’

‘They can form it at the next confession, taking advantage of their first opportunity to go to confession.’ 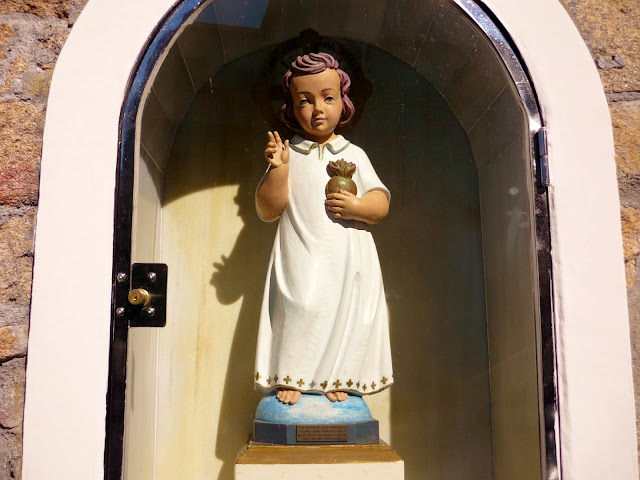 After that the Child Jesus disappeared without saying anything more.
The most striking part of the first apparition at Pontevedra is the incomparable promise made by Our Lady: to all those who make the Five First Saturdays reparatory devotion, under the requested conditions, "I promise to assist them at the hour of death with all the graces necessary for the salvation of their souls." This amazing grace, which even the holiest souls are not assured of, is promised unconditionally to those who make this devotion. It serves as an indication of the great power of intercession that God has granted to the Blessed Virgin for the salvation of souls.
Lucy’s confessor later gave her a series of questions about the apparitions at Pontevedra. One of the questions was: "Why five Saturdays and not nine or seven, in honor of the Sorrows of Our Lady?" Upon receiving the questions, she prayed to Our Lord to enlighten her with the answer, which a few days later she gave to her confessor. This is what she wrote:

As I was in the chapel with Our Lord part of the night of May 29-30, 1930, and speaking to Our Lord about questions four and five, I suddenly found myself more intimately possessed by the Divine Presence, and if I am not mistaken, here is what was revealed to me:
‘My daughter, the reason is simple. There are five kinds of offenses and blasphemies uttered against the Immaculate Heart of Mary:

‘There My daughter, is the reason why the Immaculate Heart of Mary asked Me to request this small act of reparation, and in consideration of it, to move My mercy to forgive souls who have had the misfortune to offend Her. As for you, seek unceasingly, through your prayers and sacrifices, to move My mercy with regard to these poor souls.’

We have in this communication from Our Lord one of the most important ideas in the Message of Fatima: since God decided to manifest His plan of love, which is to grant His graces to men through the mediation of the Immaculate Virgin, it seems that their refusal to submit with docility to that Divine Will is a sin which particularly wounds His Heart and for which He no longer finds in Himself any inclination to forgive. That sin appears unpardonable, for there is not, as far as Our Savior is concerned, any crime more unpardonable than to scorn His Most Holy Mother and to outrage Her Immaculate Heart, which is the sanctuary of the Holy Ghost.
In 1929, when Our Lady appeared at Tuy, She confirmed the necessity of this devotion She requested at Pontevedra with these words: "Souls are so numerous whom the justice of God condemns for sins committed against Me that I come to request reparation. Sacrifice yourself for this intention and pray." Our Lady affirms with sadness that many souls are lost because of their scorn and blasphemies toward Her. Yet it is She who intervenes for them, asking our cooperation, through the small reparatory devotion of the Five First Saturdays.
Our Lord makes this devotion, according to the wish of His Holy Mother, a sure and easy means for converting souls who are in danger of being lost eternally, and of consoling the wounded Heart of the Immaculate Virgin. By performing this devotion, we participate in the mystery of the Communion of Saints: it makes the salvation of souls really depend on our own generosity because the Blessed Virgin Mary, constituted by Her Son as Mediatrix of all Graces, cannot act alone. She needs us to lovingly make "small devotions" of reparation in order to save souls from hell. The salvation of souls is thus one of the great purposes for the practice of the Five First Saturdays’ devotion. Our Lady had already introduced this intention to the three shepherds, during Her August 19, 1917 apparition, when She asked them to pray and make sacrifices for sinners. 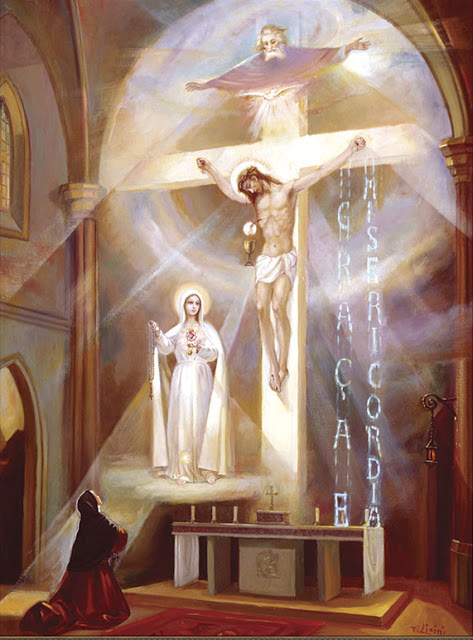 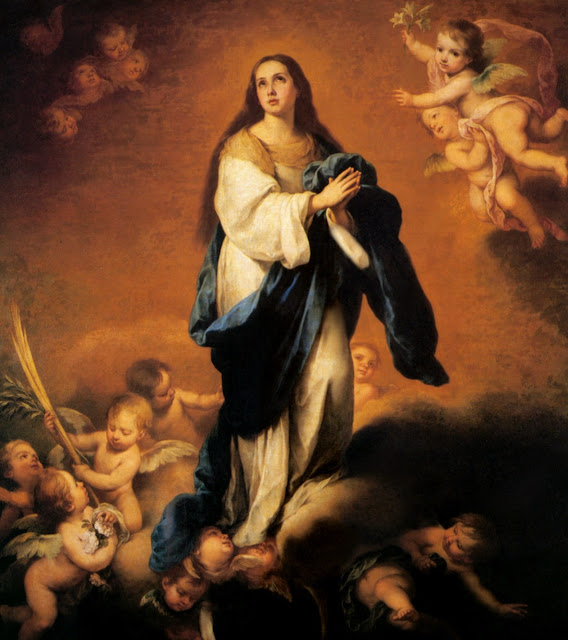 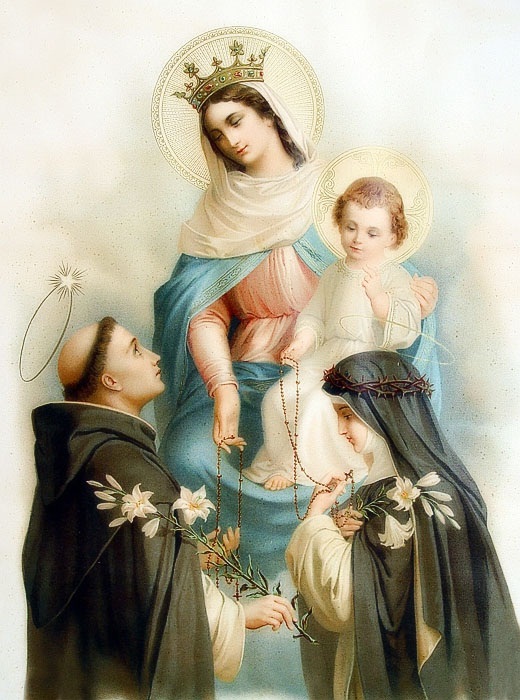 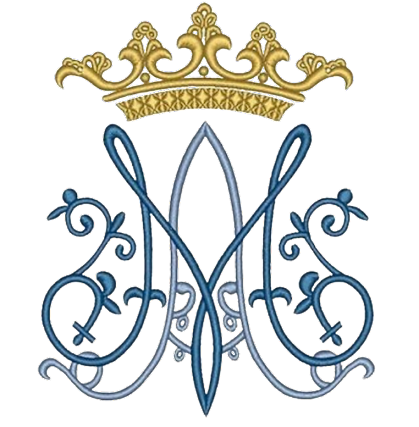